Is the Anaheim City Council the Next Target for Recall Over Police Abuse? 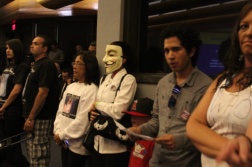 As Fullerton residents anxiously awaited their City Council recall results on Tuesday night, a group of about a dozen protesters gathered at an Anaheim City Council meeting. The protesters were family members of Caesar Cruz, Justin Hertl, Joe Whitehouse and Martin Angel Hernandez; all shot to death by Anaheim Police as far back as 2003.

Others were members of the so-called Kelly’s Army, supporters of Kelly Thomas. Theresa Smith, mother of Cruz, who was killed in 2009, has protested outside of the department on Harbor Boulevard for the past two and a half years. Since last year, other families affected by officer-involved shootings have joined her during her weekly protests.

It was the first time the family of Cruz have taken their fight to the Anaheim City Council.
Read more at OC Weekly’s Navel Gazing