A little ‘Love’ goes a long way in Santa Ana

Every day for the last 23 years, Jeff Jun gives out lollipops to his laundromat customers, giving them a reason to smile as they graciously accept the treat.

For the past two years, Jun has partnered with Laundry Love and given the community much
more to smile about.

Nestled in the heart of downtown Santa Ana, his nondescript building with the lettering “Lavandería,” makes it look like any other laundromat in Orange County. However, once a month, Jun’s laundromat becomes a place for emotional connections and spontaneous dance parties through a community effort called “Laundry Love.”

Laundry Love Santa Ana strives to create regular opportunities to help people who are struggling financially by assisting them with their laundry. When organizer Scott Overpeck came to Jun with the idea, he was compelled to say yes.

“Humans can’t survive without other humans,” said Jun. “We need to help one another.”

Anyone who has lived without a washer or dryer might know the laundromat experience: Bring enough quarters and detergent, and then sit and wait two or more hours for clothes to wash and dry.

But for those less fortunate in Orange County, laundry is both a logistical problem and financial burden. Many of the homeless drift from shelter to shelter receiving donated clothes, without the money or means to wash them.

Laundry Love helps patrons with two free loads of laundry, providing quarters, detergent and interaction for some of Orange County’s most needy. Over a period of four hours on March 15, Laundry Love Santa Ana helped 42 individuals and families complete 102 loads of laundry. Some lined up four hours prior to the start of the session to receive assistance.

Laundry Love nights revitalize the otherwise hum-drum environment of a laundromat. Instead of boring elevator music droning on, Jun blasts a jukebox that plays the latest pop hits.

As the jukebox blared, Overpeck enthusiastically danced with the kids, and even Jun joined in for a shuffle or two, wearing a prominent fedora hat and a beaming smile. 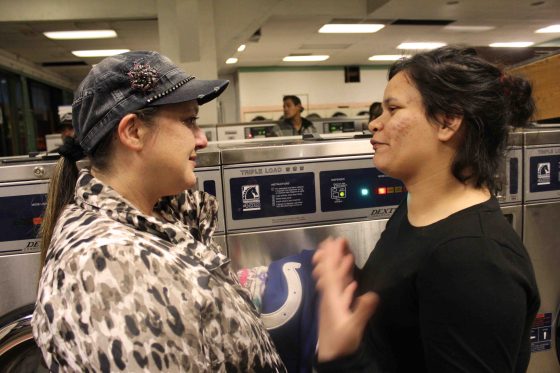 Arita Engman of Diamond Bar came with her young daughter, Ariana-Isabella, and their church group, hoping to lend a hand as part of an outreach initiative.

She said she came to give, but instead ended up getting back so much more.

“It’s very touching to help,” she said. “It’s such a small task, but leaves such a big impression. I did not expect it to affect me this much.”

Her eyes welled up in tears as she listened to the story of an 18-year-old woman who wanted to be identified as Mystique. The former Tustin resident couch surfs and sometimes has to live on the streets of Santa Ana by the Civic Center when her friends can no longer accommodate her stay.

Mystique was kicked out of her father’s house on her 18th birthday, almost a year ago, after her father remarried.

Mystique’s blue eyes shifted from side to side as she tried to tell of her hardships of being homeless. She said she feels embarrassed about her situation, as she suffers from disabilities. From time to time, she experiences brief episodes of psychosis and anxiety, getting confused easily and often repeats phrases over and over.

As a result of her drifting, Mystique had not been able to wash her clothes in months.

“I am so happy right now,” said Mystique. “I feel so blessed. This is like a birthday present to me.”

Engman bonded with Mystique and told her something she has never been told before: “You are a beautiful person.” Mystique hugged Engman as her clothes rotated in the large washer that hummed behind them.

“I remember growing up how the feeling of clean sheets after my mom did laundry felt so comforting when I went to sleep at night,” Engman said. “We take things like a washer and dryer for granted.”

Overpeck started Laundry Love Santa Ana a little over two years ago after seeing the dire need for the homeless to receive assistance in the area. He said the hope is that long-term relationships will form as a result of the close interaction of the Laundry Love experience.

“At the core, success is seeing people talk with people they wouldn’t be interacting with otherwise,” he said. “When you start crossing those socioeconomic barriers, it humanizes people.”

Martin Avila, 29, accompanied Mystique to help her carry her clothes to the laundromat. He has been living with his aunt since he was laid off at his job at a car dealership three months ago. Not only was he able to receive help that night, but he also plans on coming back as a volunteer to help others.

“It feels good to hang out with good-hearted people,” he said. He looked around the laundromat, then his eyes fixated on the dark streets of Santa Ana that loomed outside of the laundromat. “We don’t see much of that around here.”

Originally featured in The Daily Titan