David Inga (front, center) singing during the hunger strike kick off on May 1 at Cal State Fullerton

Students for Quality Education (SQE) officially began their hunger strike Wednesday. The students are starving themselves of food in response to the CSU Chancellor Charles B. Reed and Chair Bob Linscheid’s failure to engage in direct dialogue with students over their demands.

David Inga, a history graduate student and the only California State University Fullerton student participating in the strike, plans to engage in deliberate starvation along with 11 other students from six CSU campuses.

SQE presented four demands to the CSU Board of Trustees March 20. They gave them about 30 days to sit at the table to discuss four demands: Create a five-year freeze on tuition increases, eliminate all housing and car allowances for all 23 campus presidents, rollback executive salaries to 1999 levels and an extend of freedom of speech on all campuses.

Inga said the student group wants to have their voices represented as the Board of Trustees is not a democratically elected body and their decisions are not made on behalf of faculty, students and greater university community.

“We felt we had to escalate our actions because the other end — the Board of Trustees and the Chancellor’s Office — have been escalating their actions in terms of continuing tuition fee increases and speeding up the process of privatizing the university,” said Inga. “A lot of us feel like our backs are up against the wall. All other avenues of resisting have been exhausted.”

The SQE chapter at CSUF set up two tents and signs on the lawn in front of Langsdorf Hall Tuesday and plans to stay until Friday. About four students, including Inga, spent the night on the lawn Tuesday night.

Inga said the occupation in front of Langsdorf Hall at CSUF will be brief because he and other supporters will be joining other student hunger strikers in Long Beach Friday.

Inga and some other SQE hunger strikers at the other campuses went on a test fast for 48 hours.

Inga’s last meal was a vegetarian burrito at 7 p.m. Tuesday, which was the day designated as a “General Strike” within the Occupy movement and other activist groups.

At midnight on Tuesday, when the strike “officially” started, Inga and his supporters toasted with water bottles to celebrate the kick-off of their action.

Garrett York, a psychology major, was at the tent occupation informing students about the hunger strike Wednesday afternoon. He said many students who have come up had been really receptive to what SQE is doing and seem appreciative that someone is out there taking this action for them.

York said one of the demands he feels is most important is setting back administrative pay to 1999 levels. He said, to be fair, administrators should have to sacrifice the way students and faculty have.

“The (state) legislature have been citing constantly that (the) money they send to the Cal State system is put into the pockets of the administration,” said York. “Their pay raises have been costing students … To roll back the pay to the levels they were before is a sign to the state that money is being appropriated responsibly throughout the system, and they should put more funds into our higher education system.”

Lea Jarnagin, Ph.D., dean of students, said the SQE and student supporters have been in contact with CSUF officials about their actions on campus.

Jarnagin said the administration and protesters made a compromise; demonstrators can be in Langsdorf Hall from 10 p.m. to 7 a.m., when the hall is closed. Otherwise, the students have agreed to be outside.

In spring 2011, members and supporters of We! Alternative Voices for an Alternative Future formed a crowd of about 100 people on the second floor of Langsdorf Hall, where they camped out overnight until Gordon, who at the time was still president, signed a declaration for higher education.

“We learned from that experience … we had quite a disruption of business in that building,” Jarnagin said. “Offices where people work and where classes are held were hard to get to and access to elevators (was) being blocked. The entrance to the deli cafe where students get food was also difficult for students to access.”

She said she understands Inga’s frustration with what is happening to public education, but thinks his actions are drastic.

“I think that (Inga’s hunger strike) is an extreme measure, and it makes me concerned for him as a student and human being … I am concerned about his ability to function physically, emotionally and psychologically, and I have communicated that to him … I think his role as a student, especially (with upcoming) finals, should be a priority.”

Jarnagin said Inga has been offered the services of the Student Health and Counseling Center during his action while on campus. 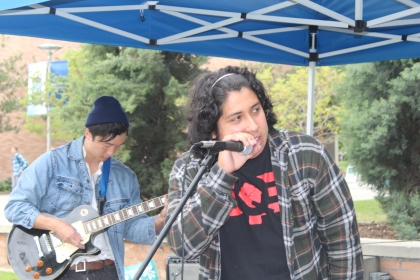 Originally featured in the Daily Titan