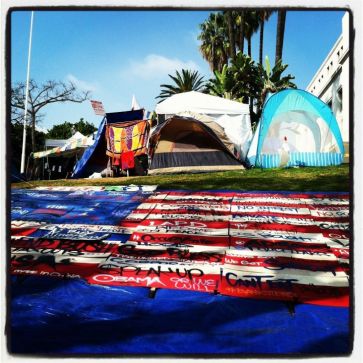 In just under three months, Occupy Wall Street has managed to become a full fledged movement in the U.S. and around the world. Last month, Time magazine wrote Occupy protesters have succeeded already by “changing the national conversation from a focus on the debt to one of income inequality, opportunity inequality and a system they say has left too many people without a voice.”

Occupy Los Angeles has the distinction of having been one of the largest and longest running occupations of the movement. The protesters had a good relationship with the city, however the string of crackdowns on occupiers across the country gave city officials a political opening to start removing demonstrators.

On the night of November 27, over 200 riot police showed up at Occupy LA. While protesters and media prepared for a raid, it never came. Instead, police officers instructed the crowd to stay off of the streets and on the sidewalk. Demonstrators celebrated when the majority of the police left in the early morning hours of Nov. 28.

However, it would only be less than 48 hours until the police moved in to evict.

Early morning police raids and protesters linking arms to protect their camps had become a norm throughout the month of October during various police crackdowns of occupations in many U.S. cities. However, the militarized police actions against Occupy Oakland brought the crackdowns into the limelight on the night of Oct. 25. Oakland police used flash tear gas grenades and rubber bullets to clear out thousands protesters. Two U.S. military veterans were critically injured during the raid and dozens of others required medical attention for injuries sustained through police actions and tactics. Only weeks later, police raided the original Zucotti Park encampment in New York City on Nov. 15, leaving many occupiers in major cities worrisome that they were next.

As New York City and Oakland garnered criticism for their militarized police tactics, Los Angeles was heralded for staying away from forcibly removing protesters. As the occupiers settled into their encampment in early October the city welcomed them with open arms.

The open arms soon became a shut-door as Los Angeles Mayor Antonio Villaraigosa announced the city would be removing the encampment due to concerns about the City Hall landscape deteriorating and public health concerns. On Oct. 26, Mayor Villaraigosa said the encampment on the City Hall lawn could not continue indefinitely. A month later, on Nov. 26, the Mayor announced Occupy LA would be shut down. According to the Los Angeles Times, nearly 300 protesters were arrested on non-violent charges during the eviction on Nov. 30.

Massimo Marini from Occupy Santa Ana was arrested at Occupy LA and booked at LAPD Central Division just under a mile away from City Hall. He said he was among 30 supporters of Occupy LA linking arms around a tent in the main plaza who were ready to be arrested as an act of civil disobedience. Marini had put himself on the National Lawyers Guild list of those willing to be arrested during the raid.

Marini said the booking process took over seven hours as they waited and were transported by bus to a jail in Van Nuys, then taken back to the jail in downtown LA. He said the zip ties used dug into his wrists through his gloves which may have caused temporary nerve damage.

Marini was charged with a misdemeanor with his bail initially set at $5,000. He was able to get it reduced to $2,000. He was released on the afternoon of Dec. 2 after spending two nights in a 5 x 8 cell in jail.

“It was not the typical catch and release of misdemeanor charges,” he said. “I believe we were being held longer because they didn’t want us going back out to protest and that’s understandable. But on top of that, we had the huge bail amount and some of us were having trouble getting bail accepted through the bondsman.”

Although there have been reports of police abuse against protesters, Marini said he did not feel his rights were violated while in jail. Arrestees were fed meals, allowed to shower and even were played movies on Thursday afternoon and were able to read newspapers.

“It’s part of the act of civil disobedience to flood the system,” he said.  “If the best the police have to try to suppress it is to lock us up in jail, so be it. I strongly believe in this movement and I feel what happened to us strengthens the movement as a whole.”

Anthony Velloza, a former U.S. Marine from Occupy Santa Ana, was at Occupy LA during the police raid and narrowly escaped the camp.  He was among four that were arrested at Occupy Santa Ana in October for illegal camping when the occupation tried setting up tents on the Federal Building lawn.

Velloza was featured on Fox Channel 11 news earlier in the night as he criticized the militarized response to the occupation. His remarks were captured on video and posted on YouTube, where it has garnered over 16,000 hits.

As Velloza has participated in both Occupy LA and Santa Ana actions, he said he felt like a new stage was ahead for the movement.

“It’s the end of the beginning,” he said. “I feel like its moved on past occupying space through tents, now its on to mobilizing to reach out to the media and Congress.”

Velloza said Occupy Santa Ana hopes to form a coalition strong enough to take on local governments and the media to get their message across about putting people over profits.

The protesters that make up Occupy Santa Ana can be described as small tight knit group of about 20 demonstrators who juggle supporting the occupations in neighboring Irvine and LA along their own personal lives with work, school and families. About 10 of the protesters showed up in solidarity for Occupy LA’s eviction. The group is in the process of outreaching to different groups such as a service workers union, Veterans Against War and local homeless advocates to strengthen their numbers.

So far, they have not been able to establish an encampment in front of the Federal Building in Santa Ana due to unlawful camping laws, however they have won the City Council’s support for their cause.

Meanwhile, raids and police action against protesters are continuing in Washington, D.C.,  Boston, Santa Cruz, Nashville, San Francisco and other major U.S. cities. The movement has seen 4,700 arrests to date of non-violent protesters. A mass action is being planned in the West Coast on Dec. 12 as all of the coastal occupations have joined in vowing to shut down the ports as an act of protest against the one percent.

Read a detailed description of the LAPD’s Occupy LA eviction strategy on the LA Times website.