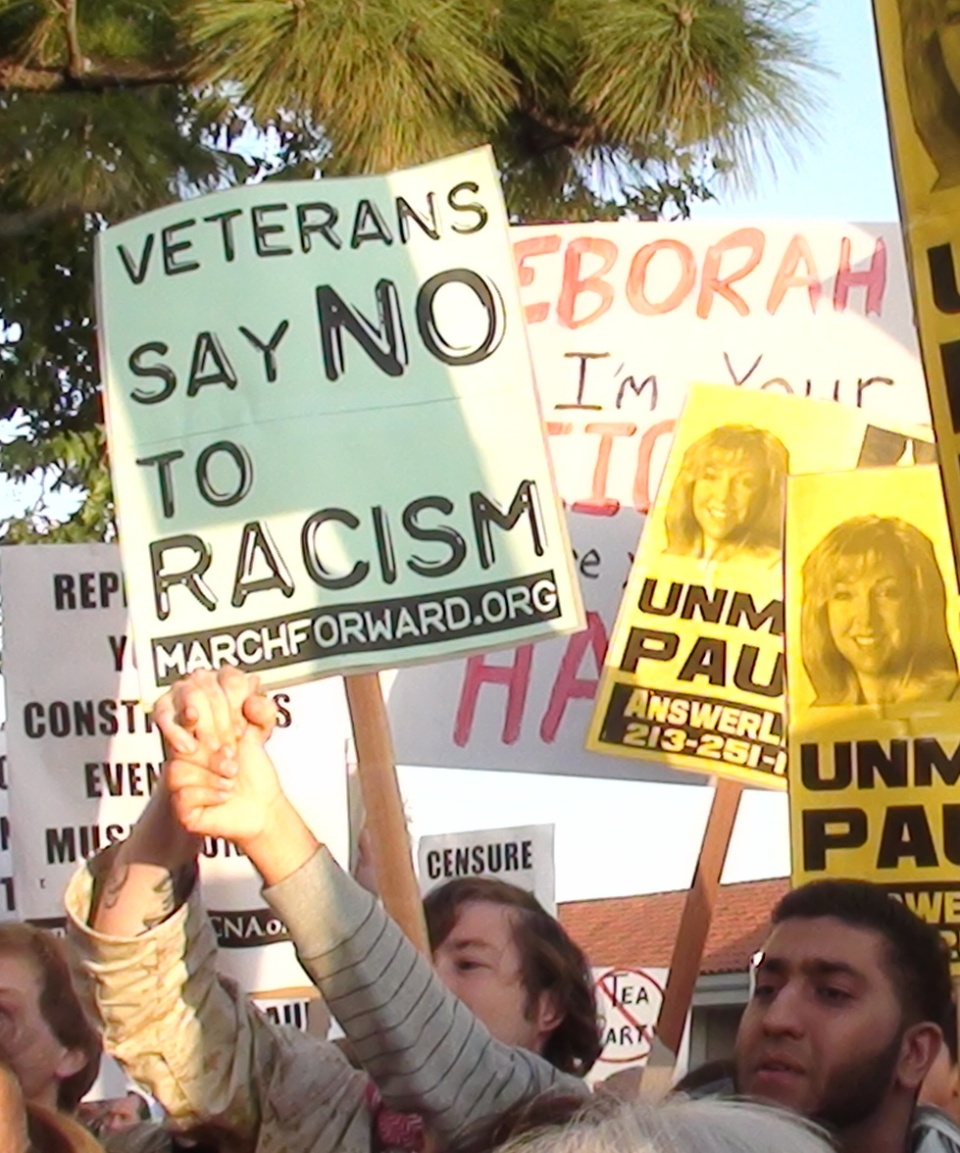 Michael McMahon was walking his dog when he first heard the chants. He watched as hundreds protested in front of the Villa Park City Hall during the late afternoon. Some were holding signs that read “Unmask Pauly” and “Stop GOP Hate in the OC.”

As a resident of Villa Park for ten years, McMahon said he has never seen anything like this.

“Villa Park is a nice, quiet, non-controversial city,” he said. “Our sleepy town has been woken up.”

Protesters gathered in front of City Hall during a March 22 city council meeting to speak out against statements Councilwoman Pauly said at a rally outside a Muslim charity event in Yorba Linda.

There were about 500 protesters opposing Pauly and 50 of her supporters. Intense, emotional showdowns took place between opposing protesters. There were heated arguments about religion, politics and race. While the protest did not escalate to violence, at times both sides engaged in shouting matches.

At least 30 Orange County Sheriff’s officers surrounded City Hall as a precaution due to a San Pedro man who was arrested under suspicion of making death threats against the councilwoman.

“It looks like democracy in action to me,” McMahon said of the protests. “I see some heated debates going on but I’m just glad it’s non-violent.”

Protesters criticized the backgrounds of two speakers at the charity event: Imam Siraj Wahhaj and Imam Amir Abdel Malik Ali. Wahhaj was an alleged co-conspirator in the 1993 World Trade Center attack but was never charged. Malik-Ali has been vocal about his support for Hamas and Hezbollah. Both are involved in social activism and charity events on a regular basis.

According to its website, the organization is a social services branch of the Islamic Circle of North America and its projects include women’s housing, hunger prevention, family counseling, medical aid, emergency financial support and funeral and burial assistance.

A video of Villa Park Councilmember and Orange County GOP Vice Chairwoman Deborah Pauly’s statements circulated on the web garnered the most attention.

“What is going on in there is pure unadulterated evil,” Pauly said at the rally. “I don’t even care if you think I am crazy anymore. I have a beautiful daughter, I have a wonderful 19-year-old son who is a United States Marine. As a matter of fact, I know quite a few Marines who would happy to send these terrorists to an early meeting in paradise.”

The video, released by the Council on American Islamic Relations (CAIR), also showed a group of protesters later on in the evening hurling insults at Muslim families. The video went viral and acquired major media attention across the state and even the nation. A backlash ensued against the actions of those at the rally.

The North Orange County Conservative Coalition released a statement saying that a splinter group was responsible for the verbal attacks against Muslim families entering the charity meeting. 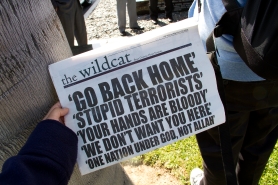 A photo of the front page of an issue of the Brea-Olinda High School newspaper listing the offensive remarks of the group harassing families entering the ICNA charity event. Image Credit: http://www.leenabutt.com

“While we held our peaceful, organized and informative program on the grass area, away from the building, a group of unknown, uninvited protestors gathered near the entrance to the community center to stage their own noisy protest,” a post by Jeremy Yamaguchi on the group’s Facebook page reads. “We have publicly denounced these badly behaved protestors.”

In response to the protest against the charity event, the ICNA stated on their website that they invite the protesters from Feb. 13 and other concerned individuals to meet with the Board of the organization to address any concerns.

Pauly has not issued a formal apology for her statements. She has condemned the speech of the “fringe” group outside of the charity meeting later on in the night, according to the Orange County Register.

The Daily Pilot reported that she was referring to two controversial keynote speakers who were invited to the charity event, not to all the Muslims who were assembled there. But she chose not to mention their names at the time because, she said, part of her was afraid.

According to the Los Angeles Times, Pauly called the protest against her statements outside of the Villa Park City Council meeting on March 22 “an act of terrorism.” 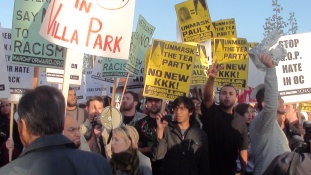 The protesters consisted of a diverse crowd of mostly Orange County residents. Some were more vocal and others watched as the two opposing groups exchanged heated words. Critics of Pauly, among other slogans, shouted “Racists go home!” while her supporters shouted “No Sharia Law!”

The City Council public comment session extended to over two hours. Many speakers condemned her statements and some demanded her resignation. Others defended Pauly saying that she was exercising her right of free speech.

Meanwhile, outside of the City Council chambers, Pauly supporters mocked the protesters, blasted horns with ear-piercing sirens in a seemingly attempt to drown out the rally chants. Protesters fought back with louder chants.

Noor Aljawad is 19-year-old University of Santa Barbara student who is from Mission Viejo. She attended the protest to show her resentment for Pauly’s remarks. She said she was appalled at the counter-protesters claims that Sharia Law could be imposed in the United States.

“There are so many different types of Sharia Law and some are more patriarchal than others,” Aljawad said. “Just because someone is Muslim in America does not mean they agree with the political laws put into place in other countries.”

Even though Pauly claims her statements were made out of context, she said, there were obvious racial undertones to her words and the rally in general.

Aljawad said attendees of the charity meeting included women and children with no ties to terrorism.

“Whether or not the rally was not directed towards them, they felt the stigma,” she said. 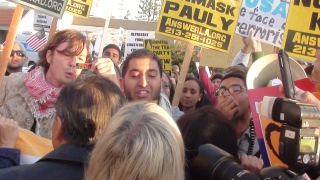 Protesters have a showdown with Pauly supporters

Mission Viejo resident Husam Seraffi attended the protest in front of the Villa Park City Hall to show his disapproval of the Feb. 13 rally. He said Pauly and her supporters appear to be uninterested in engaging a dialogue with the Muslim community. As a result, their intentions are not clearly defined.

“The rally created mass generalizations,” he said. “There seemed to be an overall antagonistic view towards Muslims.”

Seraffi said he feels Pauly’s statements, regardless who they were directed to, insinuated a random act of violence.

Marti Potter, an assistant Track/Cross Country Coach at Villa Park High School, has lived in Villa Park and known Pauly for 14 years. She said she came out to the demonstration to protest Pauly’s role in the community.

“Deborah Pauly is crazy,” she said. “She loves stirring the pot and getting a rise out of people. This is her mess and now she has to clean it up.”

Potter said during the course of over a decade since she has known Pauly, she thinks Pauly is not the best role model for children in the community.

“She is not representative of the kids I coach, my neighbors or our city,” she said. “We are all very diverse and tolerant. The next generation needs to know she is trying to speak for them and it is not right.”

Watch the video below to see footage from the March 22 protest in front of the Villa Park City Hall:

An ABC news clip of the charity meeting and rally can be viewed here: http://abclocal.go.com/kabc/video?id=7957084

The video that CAIR released, containing an excerpt of Pauly’s speech, can be viewed here: http://www.vimeo.com/20757802